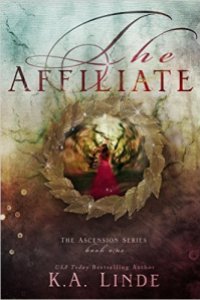 Engaging plot. Complex world. Scintillating romance. This is how I summarize The Affiliate by K. A. Linde.

SUMMARY (From back):  On the day of her Presenting, in front of the entire Byern Court, seventeen-year-old Cyrene Strohm’s lifelong plans come to fruition when she’s chosen for one of the most prestigious positions in her homeland—an Affiliate to the Queen.

Or so she thinks.

When Cyrene receives a mysterious letter and an unreadable book, she finds nothing is as it seems. Thrust into a world of dangerous political intrigue and deadly magic, Cyrene’s position only grows more treacherous when she finds herself drawn to the one man she can never have…

Cyrene must decide if love is truly worth the price of freedom.

WHAT I THOUGHT: I’m a sucker for a believable romance and this book definitely had that in spades. But there’s more. Linde introduces us to the complex world of Byren that is filled with numerous factions vying for their own gain and thus not friendly to each other…it’s the stuff great stories are made of, right?

The writing flowed and drew me in to the world. One thing I can’t stand is when I notice the writing, for it detracts from the narrative. This was not at all the case in this book. The prose hid behind the scenes and carried the story along.  I do have one complaint though and it’s purely one of style, but all the description of a new place/person was always in a large paragraph as the author introduced the “thing.” I prefer to have the details spread throughout several paragraphs so I can more easily “see” rather than be “told.” But as I say, that is more  a matter of preference.

The characters were a good mix of the best and worst of Byren and I enjoyed them. We start with the main protagonist, Cyrene who is a young woman whose selection has determined her path in life. Throughout the book we see her grow from a naive girl who has been raised in a privileged household into a young woman who catches the eye of the king, introducing her to a host of challenges I dare say her upbringing never prepared her for. We see her wrestle with inner conflicts about “knowing” the king but at every turn she holds firm to her values and principles. *claps* Good for her! I hate characters who are push-overs!

We also meet Cyrene’s best friend growing up, Rhea, and what a great friend she is. I loved her humility but helpfulness. She’s the best friend everyone wishes they had. And then there’s the bad boy, Ahlvie who flirts with trouble, keeping it as a close friend who definitely pushes the plot forward.

But we also have the folks of royalty before whom Cyrene must adapt in her new role: the king of course who surprises her senseless as she catches his eye. So naive is she that she doesn’t initially understand he views her more favorably than others. But of course the king’s affections can’t be left unchallenged, for that would make for a rather boring narrative. So, Cyrene ends up reporting to the queen… yes, exactly… And said queen is very aware of her husband’s interest in Cyrene. You see the conflict.*Rubs hands together and grins*

As for the plot, the narrative is well-paced with sufficient action and reflection sprinkled throughout. One objection I had to the plot is one of the initial scenes, that of a hazing-like ritual that happened completely unexpectedly and almost seems out of place. I believe I understand why the scene is there, but I would say it was too sudden as to make it seem strange and out of place.

That aside, I thought the author also did a good job planting two central mysteries to keep readers interested: the meaning of the Presenting letter and the book that no one but Cyrene can see writing in. And this is where Linde leaves us at the end of book one, going off to search out the meaning of both. I’ll bite. And now I can’t wait until book two comes out!!

Buy The Affiliate on Amazon

IF YOU ENJOYED THIS POST, be sure to leave a comment to let me know what you thought and then scroll to the top of this page and sign up to be notified the instant a new post goes live.

FREE EBOOKS: I also invite you to download the free ebooks of the Prequel and the award winning Book one in the Andy Smithson epic fantasy series. Would you leave a review on Amazon after you read them? Thanks so much!